How To Do Basic Edits With Snapseed

My most recent article is up on iPhone Photography School. I decided to do an in depth tutorial on using Snapseed for basic editing. This article only touches on about half of the features in Snapseed, but the next one will cover the rest, and will be about using Snapseed creatively.

This is aimed at the true beginner, but even if you’re familiar with Snapseed, you might pick up a few things. There are a lot of images, and even a video to help you learn.

Here is the link for the first Snapseed article.

My most recent article is up on iphonephotographyschool.com. You can go learn how to create double exposure portraits on your iphone here.

First Video of an Edit

I’ve recently talked with Cora Edwards (keep an eye out for a feature and interview soon) and Petyr Campos about creating video tutorials, so I finally thought I’d try a random video of me editing. I probably should have started doing this much sooner, but better late than never. This is my first time recording my screen as I edit. I only wish there was an icon to show when and where I tap on the screen. Oh well. 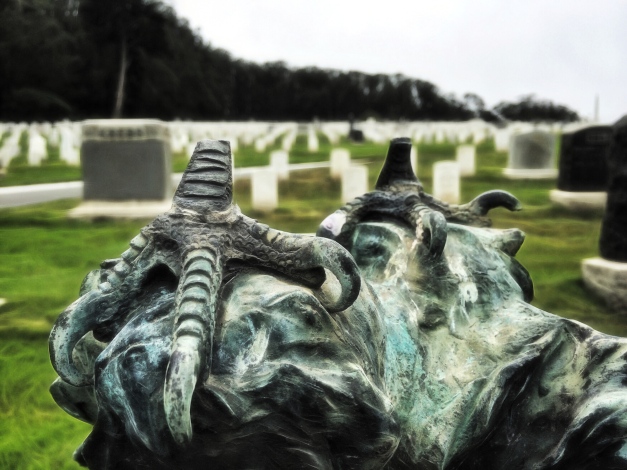 This is an image of the top of a headstone in the SF National Cemetery. There must have been an eagle on top at some point, but all that remains are the claws.

Since I didn’t add audio, I’ll let you know my thought process as I was going along. I started out doing basic adjustments to make a subtle change in the image. I wanted to see more detail pulled out, so I used the drama filter, but at a very low level. Next, I used center focus to brighten the center just a bit. I wanted more detail, so I used SimplyHDR for that. For this image, I really didn’t need much strength, otherwise it would have been overprocessed.

Next, I wanted to try a painterly app. I thought about which one to try first, and I ended up going with trusty TangledFX. I checked out how my custom settings looked on the image, and went with one of them. Then, I thought I’d try to reduce the effect, using ImageBlender. I loaded the TangledFX version and the SimplyHDR edit, then played with the slider until I was satisfied. I liked it, but thought the image could use some more contrast to make it pop. And there you have it.

What do you think about the video? Should I do some more? I hope you don’t mind me just jumping right in with no direction in mind haha. Not everyone has a clear idea of what they want to create all of the time 🙂

Phew! I’ve finally destressed a tiny bit and have found some time to write this one up for you guys. iColorama S has changed its UI since I created this, so I’m going back and trying to find all the tools I used. The only other app I used was trusty old Snapseed.

This is the image I started with. 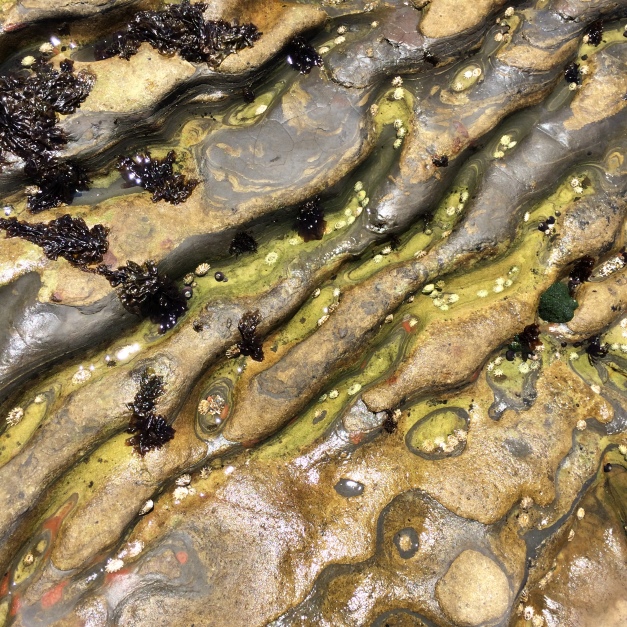 The first thing I did was choose Form>Deforms and selected the 3rd preset. This gives you the basic planet. I adjusted the settings slightly, to get it looking just the way I wanted. Then, I swear I was able to adjust settings to change the position of this new planet on my image. I didn’t want it dead center, so I moved it. In this new version, I don’t know if thats possible. I couldn’t replicate it, but the images below are from when I created the original.

Next, I believe I used Forms>Glass and chose the 4th preset. I adjusted the size of the effect, so it would look like smaller particles. I chose to mask out the effect on the planet, so it only showed up around it. I think I let some of the effect come in on the planet at a very low opacity, just to get a hint of it. 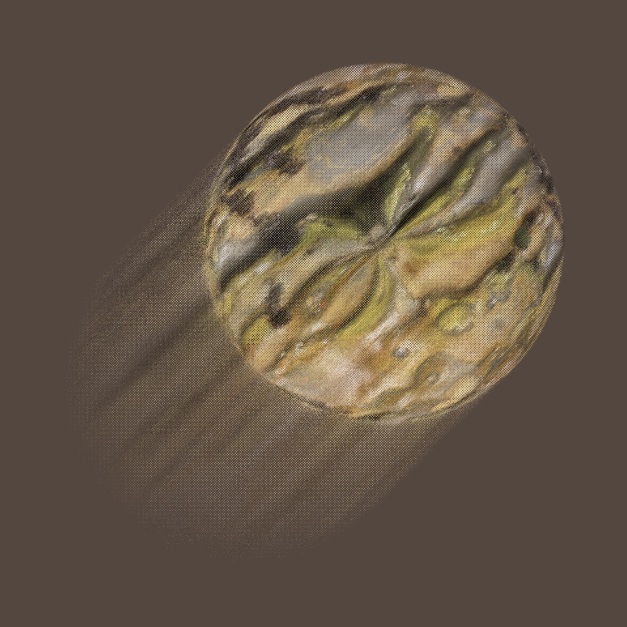 I continued to play, and ended up using Effect>Pixels and the 21st preset. 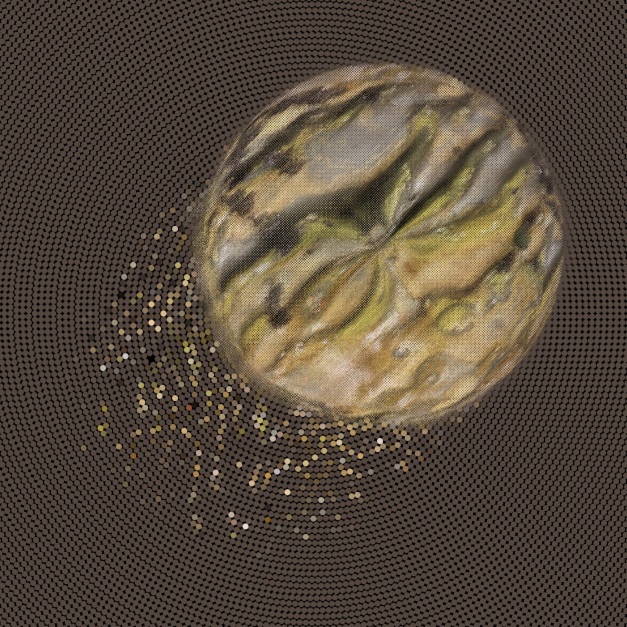 As you can see, it doesn’t look right, at this stage. There needs to be another layer of texture or light on top of it, to make it all appear to be part of the same image. I chose to add light, because if you’re looking at a planet in space, there’s got to be some light source somewhere. I used Effect>Light and the 8th preset. Then, I adjusted the settings until the light was in the spot I wanted.

(Note: As I try to recreate this with the updated version, its not working. There seems to be a bug, where the light effect I used is showing a completely different effect. I’m sure this will be sorted out, and I will send them a note about it.) 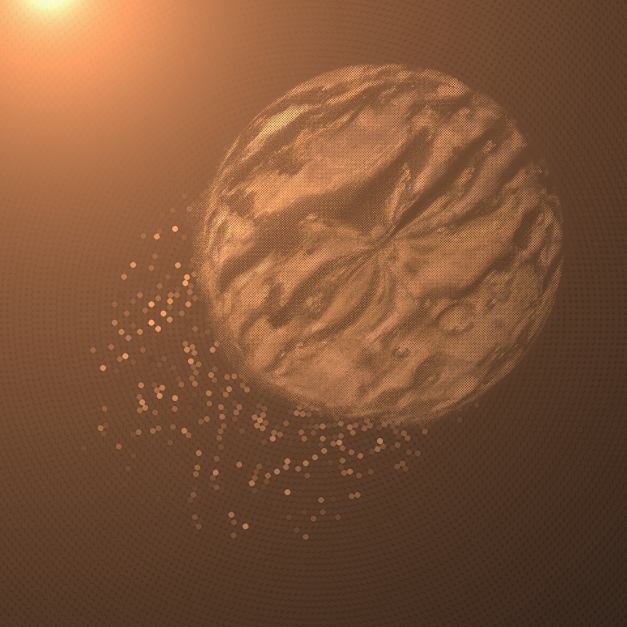 As you can see, the light makes a huge difference to the image. Now, I wanted to play with the colors a bit. I chose to use Tone>Lomo and the 9th preset at a low opacity. My guess is it was somewhere around .20. 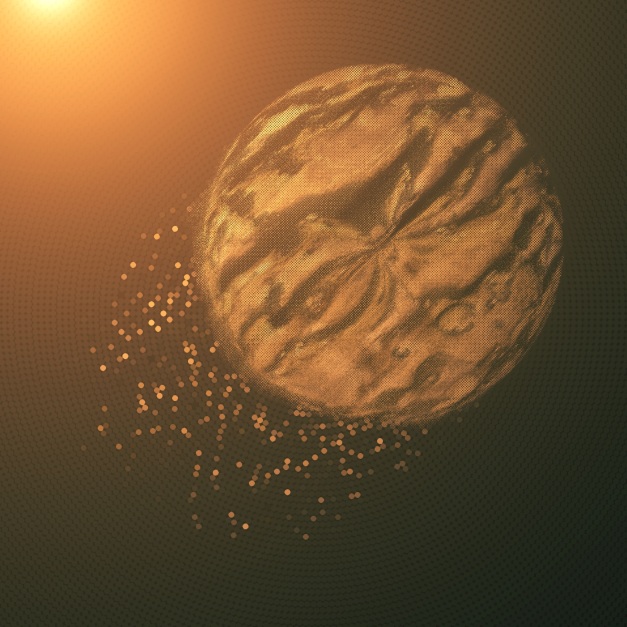 It looks good at this point, but I wanted some more contrast, and for the side furthest from the light source to be a bit darker. For that, I took the above image into snapseed, where I added a little contrast and a subtle center focus, with the center being the light source. 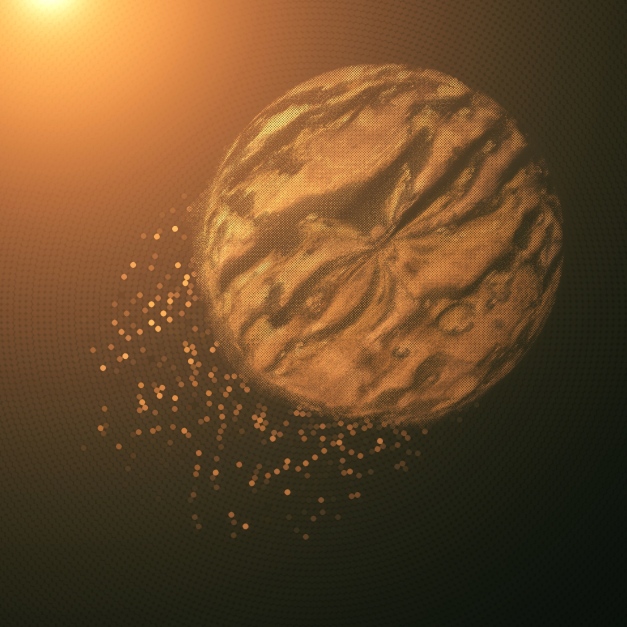 And there you have it! It looks easy when its laid out in front of you like this, but I had no plan in place when I started, so it took a little while to create. I just allowed myself to play, and decided what direction to go in, after each step. Not a bad way to be creative 🙂 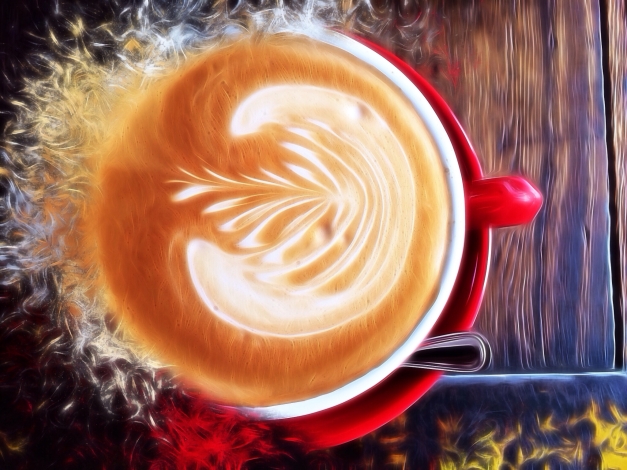 Did you know what you eat or drink has an effect on your vision? It even has an effect on the direction I go with editing, sometimes. I’ve been told you can see the energy in my images when I’m really caffeinated, either by a 5 hour energy, or too much coffee. Today, it was the coffee.

I shot this in a cool coffee shop, called Limestone, in Medford, Oregon. I wanted to get wild with the edit, so I used iColorama S to explode part of the coffee cup (see Brandon Kidwell’s tutorial,) Snapseed to edit the brightness and contrast, TangledFX for the painterly look (It really made the exploded part look different in a good way,) and ImageBlender to blend back a pre TangledFX version. I set the opacity to 76% TangledFX version, so I could get 24% of the exploded image back. I think it did a good job of bringing a bit of detail back and easing up on the painterly style just enough. What do you think? 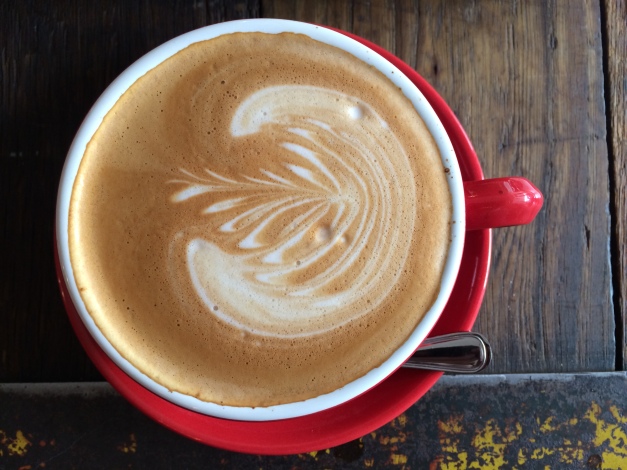 How to make a multiple exposure portrait

By request for Suzanne. This is gonna be a crude how to from my phone since I’m 400 miles from my mac. Bare with me :).

First, I chose an unedited selfie I took of myself on a mountain a few days ago. 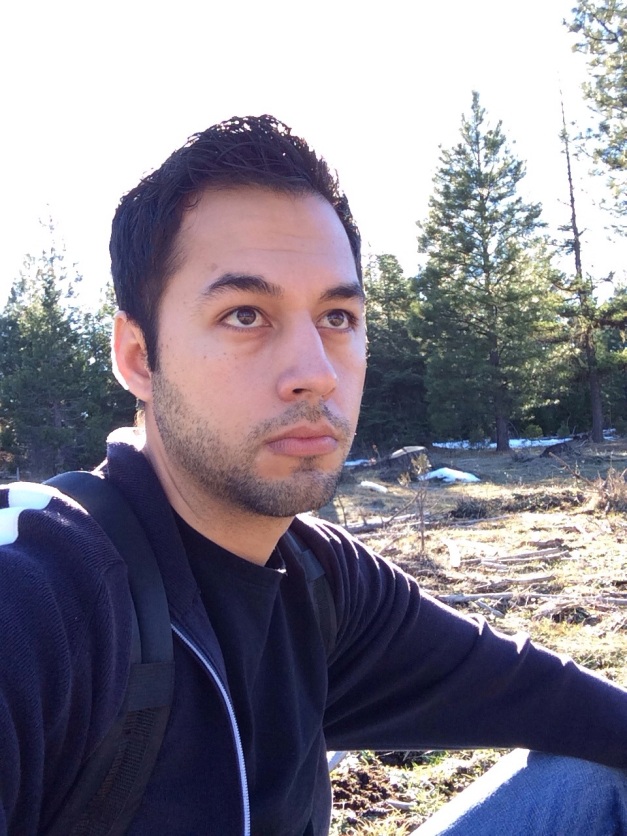 Once I knew what I was going to try and create, I needed a photo of some branches. I rolled my window down and snapped a quick shot of the tree above my parked car. 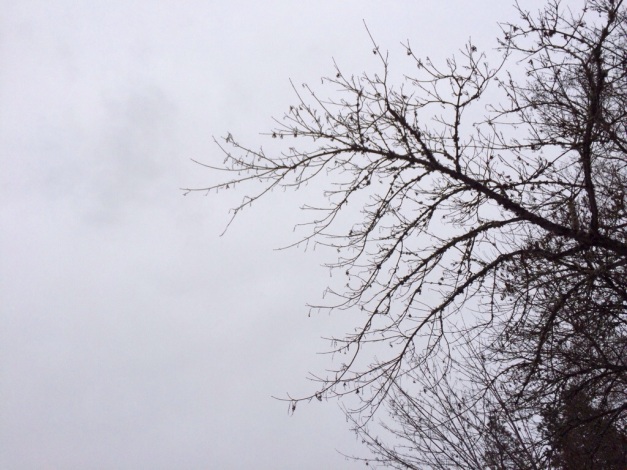 I only wanted my face from the selfie, so I opened up PS Touch and used scribble select to make a selection of my face. Use green on the areas you want to select and red for what you don’t want. You’ll want to do a better job than below. That’s just for illustrative purposes. 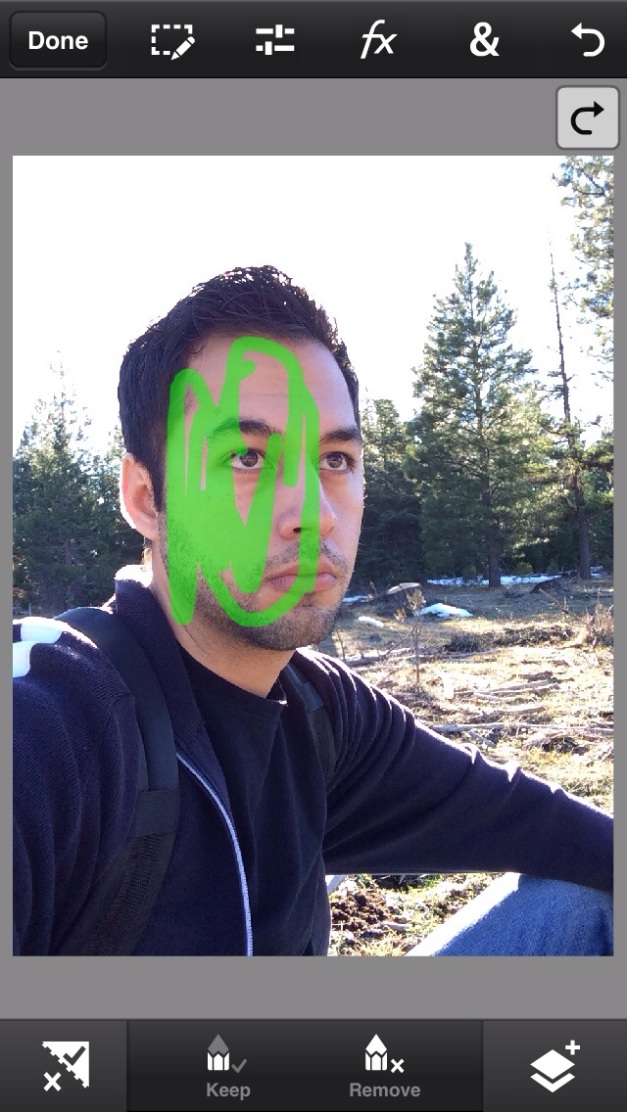 After it makes a selection, you can keep using green and red to fine tune the selection. Next, I used refine edge to get an even better selection. 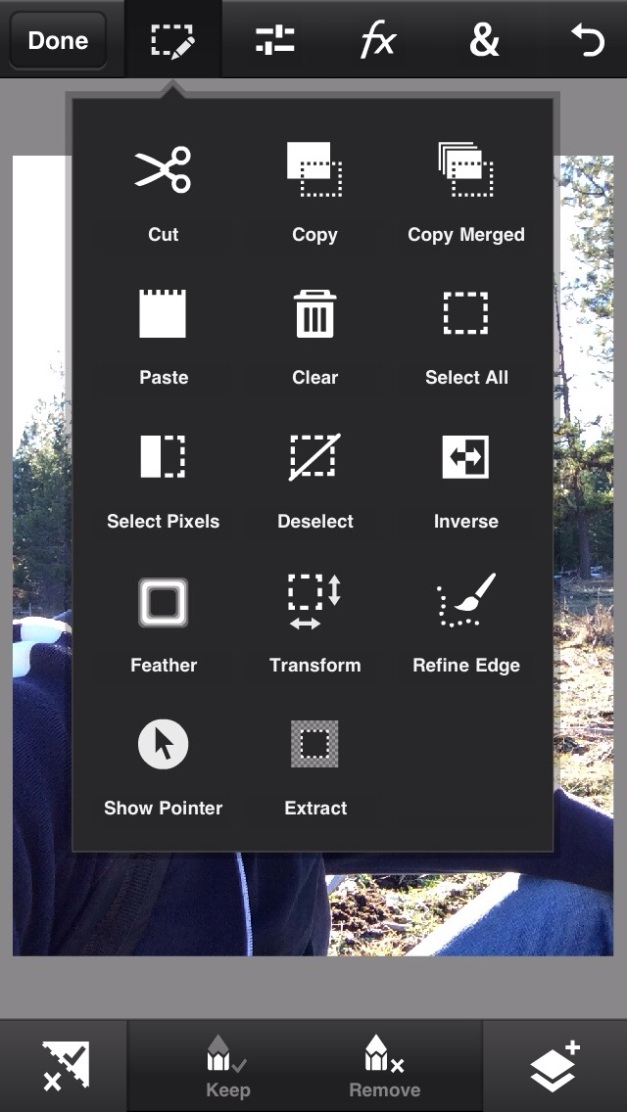 Once you’re happy with the selection, tap the bottom right to add a new layer from selection.

I deleted the bottom layer and saved my extracted head by itself. It’s not perfect, but it didn’t matter in this case. 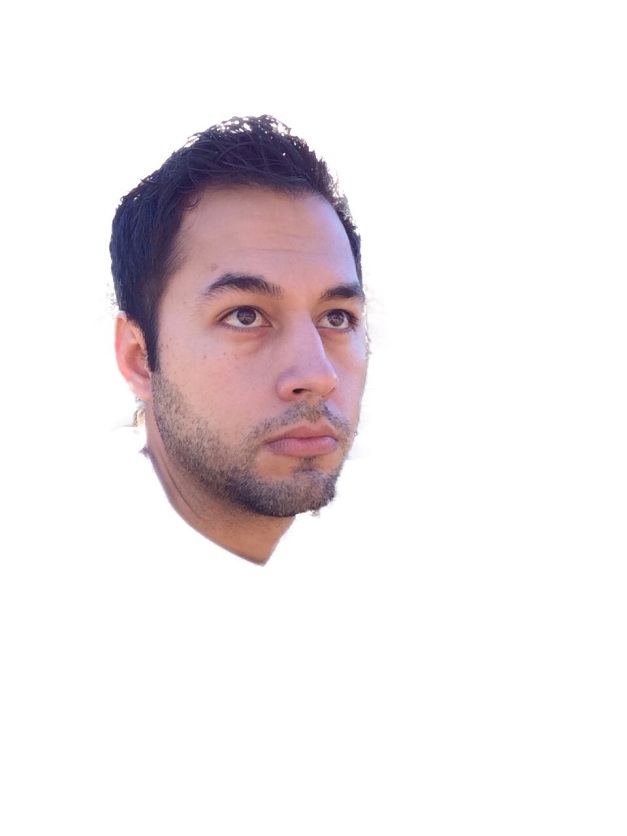 You can try to blend images in PS touch, but I like imageblender better. Load the face and tree pics in imageblender, slide the slider all the way to the right (tree pic,) and set the blend mode to screen. Next, use the move tool to rearrange the tree until you find something you like. Now, you use the masking tools to erase part of the tree image on the face. It’s important to use the soft brush for a better blend. The hard brush is the solid circle, while the soft brush looks blurred. In this instance, with the blend mode set to screen, the tree won’t show up on the white background, so you don’t have to mask it out. 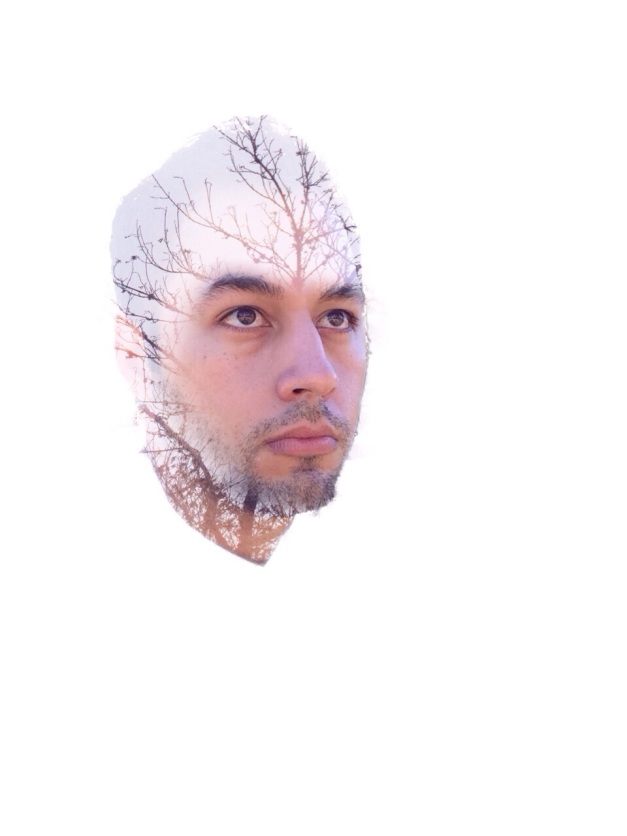 Next, I cropped tighter in Snapseed to get a composition I liked. 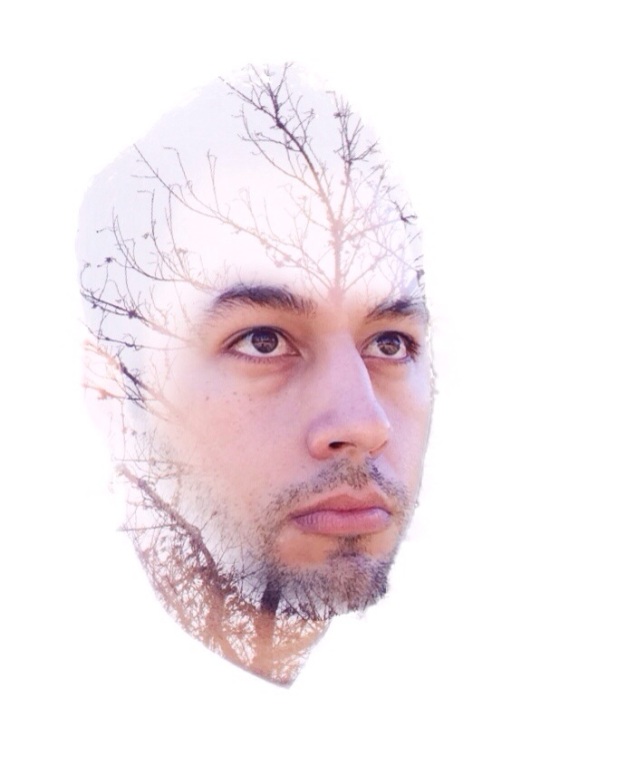 I tuned the image in Snapseed, by adjusting the contrast, ambience, and brightness just slightly. Then I used the retrolux filter to add texture and color to the image. This is the final result 🙂 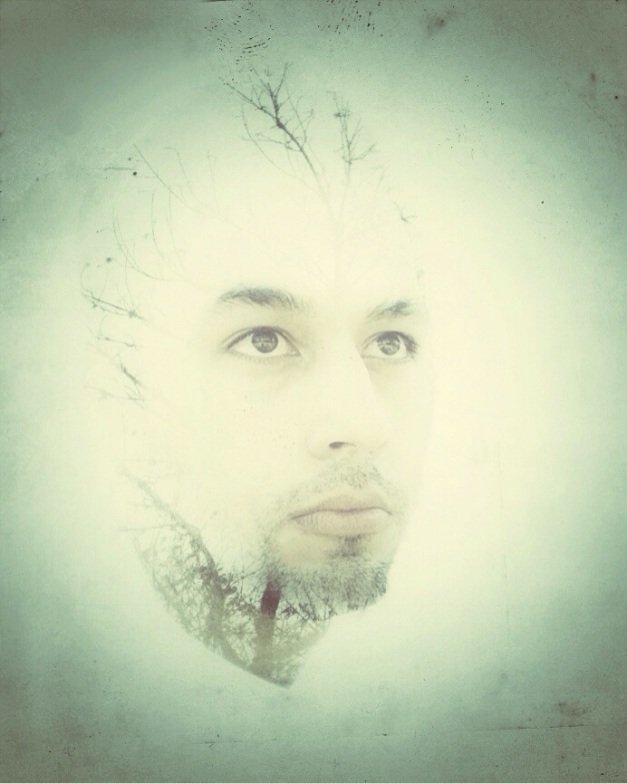 My tutorial of how I edited my Muir Woods photo is up on the Topaz blog. I hope you appreciate this look behind the magician’s curtain. I’m thinking of doing some more tutorials when I have time 🙂

I plan on going out shooting around the bay area on Wednesday, so I should have some new photos to share soon. I haven’t been too motivated to take pics around here yet. It should be nice to explore some more natural places near my aunt’s house.

In the meantime, I’ve been brainstorming and trying to come up with a surreal composite image using the piano photos. This poem, by Pablo Neruda, was posted by one of the pianos and has served as my inspiration.

Ode to the Piano

The piano was sad

forgotten in its gravedigger’s coat,

and then it opened its mouth,

the pianist entered the piano

something happened as if a stone

the light fell to the bottom

of a locked house,

an emerald went across the abyss

and the sea sounded,

the structure of the rose sang,

the milk of dawn surrounded the silence.

That’s how the music was born

from the piano which was dying,

moved up over the coffin

and from its set of teeth

the piano, the pianist

and the concert fell,

and everything became sound,

Then the man returned

from the tree of music.

or a crazy knight:

the piano closed its whale’s mouth

and the pianist walked back from it