Cloudy With A Chance of Waterfalls

I was playing with Diana Photo yesterday, and it combined a waterfall image with an image that had some clouds. This isn’t that image, but it gave me an idea. I liked the concept, but the two images that Diana Photo used, didn’t quite work for me.

I ended up taking two photos that I thought would work well together, and imported them into Union. By using the waterfall image as the foreground, I could set the blending mode to lighten, and only the brighter part of the image would show through. That made it easier to mask out the bits of the image that I didn’t need.

Next, I used Snapseed to make a few adjustments, including a vintage filter. Finally, I used iColorama to add a slight painterly edit.

My most recent article is up on iphonephotographyschool.com. You can go learn how to create double exposure portraits on your iphone here.

I think one of the reasons we are drawn to create is because we enjoy getting into that state we call the creative flow. It can be quite elusive, either on a daily basis, or as our lives go through ups and downs. I know I struggle to get into the flow these days. It can be hard to find the right time, or place, to do so.

A couple of days ago, I decided I needed to get out of my friend’s house and go hang in the park in Ashland for a few hours. I had this great idea that I would go down to the creek in Lithia park, to cool off and take photos. I drove back, deep into the park, and found a spot away from everyone. As I got down to the water, I decided I would hop along some rocks until I found something interesting to shoot. I ended up just sitting on a boulder in the middle of the creek. I was literally sitting in the flow, which, I think, helped me get into my own creative flow rather easily. The sound of the water rushing by blocked out any noise from people that walked along the nearby road.

For a while, I played with mirrorgram, creating symmetrical images. Then, I opened up Diana Photo, an app that makes double exposure images incredibly easy to create. It was free a while back, so I grabbed it when I had the chance. I had played with it a couple times, but not enough to decide if I liked it or not. Well, after a couple of hours flew by, while playing with the app, I can say that I do enjoy it now.

You can choose two images to blend, or you can randomly let the app choose for you. You can also lock in one image, and let the app randomly choose a second. This was one of the random one’s. Diana Photo does a great job of creating pleasing compositions. There are also a lot of cool filters to choose from.

The first image is a combination of a beach shot from Bandon, Oregon, and the subway in NY. When I shared this shot with a friend, she thought I was some sort of master editor haha. I had to come clean and tell her the app did all the heavy lifting. And by heavy lifting, I mean everything other than take the photos.

The second image is clearly a close up of a rose and a shot of a goose in some water. I thought the two went well together.

The third image was a shot from a foggy forest in the Santa Cruz mountains, and the lake or pond out in Sessions Woods in Connecticut, with a bunch of lily pads. Again, the blend relaly well together, and the colors seem to help them mesh. The foggy forest image was actually a black and white shot, but you can’t even tell, thanks to the filter.

What do you think? Are you excited to try the app out yourself now? I swear its easier than you can imagine.

Playing With Flowers And Oceans

I’ve been sitting on this image for weeks. I was inspired by Leah Eddy’s self portrait that she submitted for the Selfy giveaway. I immediately thought her flower looked like a sun, which made me want to try putting a flower in a landscape, and use it as a sun.

As you can see, it looked pretty silly at first. Its just a flower in the sky…it doesn’t look like a sun, or something thats emitting light.

I used Rays to make the flower look more like a light source, with rays coming from it. It still didn’t feel like it was part of the image. There is some disconnect, when it just looks like a photo on top of another photo.

I used Autopainter to create a painterly image (the first image) that makes the flower blend in better with the rest of the scene. I think it did came out pretty good, but I’m still not in love with it.

First, I want to thank you guys for participating in this giveaway. To save some paper, I assigned numbers to everyone, two for those that submitted an image. Then, I used the random number generator on random.org to get two numbers.

Without further ado, congratulations to Leah Eddy and Amanda Stevens! I will be contacting you both shortly, to get your shipping info.

Here are the submissions of double exposure self portraits. Clicking on the image will take you to their website, where you can view more of their photos. 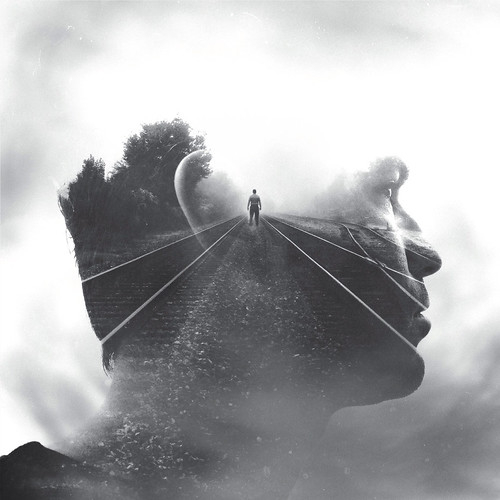 Portrait of a Self Portrait

When I saw this tree on the Ancient Oaks trail at Russian Ridge, this image came into my head, so I stopped to create it. I was running short on time, which made this feel a bit rushed to me, but I did it. I definitely want to go back and explore that area some more. The trees were pretty awesome.

I used my iPro case and super wide angle lens, on a tripod. I also used the remote from the Selfy to trigger the shutter from a distance. Shot with camera+, used levitagram to mask in the crouching me, Snapseed and simplyHDR for the final touches.

Also, if you haven’t entered to win a Selfy yet, you can still go leave a comment here. There are only 7 people entered right now, so the odds of winning are really good.

Flying Around The Yard

Yesterday, I received the latest product from iLuv, Selfy. It’s a case with a built in remote that you can remove and use as a wireless shutter release. The first thought that crossed my mind was how easy it would be to create levitating or flying photos with a remote. With the use of a few apps, it really was simple.

If your mind is blown, I’ll let you in on the secret to creating a levitation shot. Two photos are needed. One with you on something like a stool or chair, and one photo without you and the prop in it. Then you mask out the prop that you were on, so it looks like you’re suspended in the air.

First, I used camera+, because I wanted a camera app with a timer. I set it to 5 seconds, which was enough time to press the remote and hide it. Then, I imported the two images into Levitagram, setting the shot with me and the chair to the foreground. In Levitagram, you can mask out the chair with relative ease, which makes it look like you’re levitating. Finally, I used Snapseed and Mextures to do a simple edit.

I’m going to be giving away 2 Selfy’s soon, so stay tuned for details.