VividHDR is an HDR camera app with a simple user interface. For those unfamiliar with HDR, it stands for high dynamic range. HDR is achieved by combining multiple exposures of the same image and combining them to get more information in high contrast scenes than you could with a single exposure.

Swipe to the left to view the gallery. From the gallery, you can send the image to facebook, flickr, or dropbox. Swipe to the right for settings, which include geotagging, a rule of thirds grid, auto preview (if you want to review the image after taking it,) and options for saving.

Saving options include lossless TIFF format. The upside is higher quality files, the downside is not all applications support TIFF’s yet. I recommend you save the original too, if you have the free space. Might as well.

If you have auto preview on, this screen pops up where you can choose from one of the five available presets, natural, lively, dramatic, bleach, and gray art. Natural, lively, and gray art seem to be the safest presets. Dramatic and bleach can be extreme. As I understand it, they are considering allowing the users to save, and possibly share presets in future updates. The slider in the middle can be moved back and forth to see the before and afters. Tapping the palette in the bottom left brings up some basic editing controls like brightness, contrast, saturation, temperature, and tint. I don’t recommend making these adjustments in VividHDR as of version 1.3. The app is good at what it does, namely combining bracketed photos, but there are better photo editors, such as Snapseed. 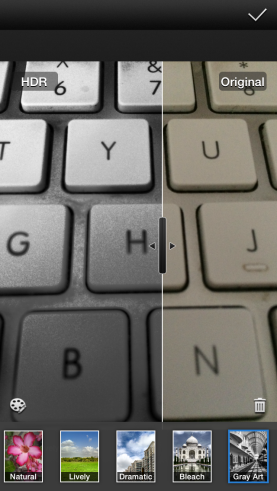 Speed – VividHDR is exceptionally fast for an HDR camera app. You’re less likely to miss shots with a faster app.

Easy to use – the user interface is simple and the presets make it easy for any user to create vivid hdr images.

TIFF files are a plus, for me.

The biggest strength, is the willingness of the developers to listen to feedback for improvements. I’ve exchanged multiple emails, giving them ideas on how to make the app even better. They really seem eager to improve the app, and have already listed what they intend to add in future updates.

It does a good job at lining up photos, so a tripod isn’t always necessary. Of course, using a tripod will yield the best results.

The algorithm isn’t perfect – The app seems to struggle in some situations. I noticed that clear skies tend to end up noisy with banding introduced. See the examples below.

As with other HDR camera apps, there is still some ghosting that occurs when things move. It’s not noticeable in these examples, since I chose the best images, but some test shots had really bad ghosting when people moved, or when waves crashed. If a developer could allow the user to mask in a certain exposure over the problem areas, it would be leaps and bounds ahead of the competition.

First, let me say that none of these images have been edited with any other apps. You can click on the images to see them larger. Now, lets look at a before and after of a difficult shot. I was inside a dark barn, and intentionally got the door with the much brighter daylight outside. It’s too wide of a dynamic range for any camera to get in one shot. Combining exposures allows you to get closer to what you see with your eyes, and VividHDR did a pretty decent job. 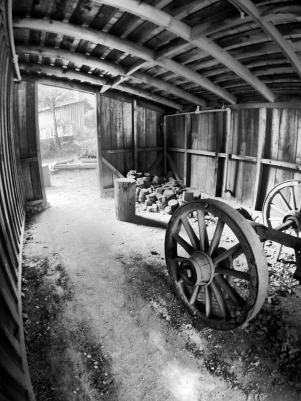 Here is another before and after comparison to give you an idea of how HDR camera apps can bring detail back into dark shadow areas. I was especially impressed with how well the algorithm blended the tiny pieces of sky between the branches. 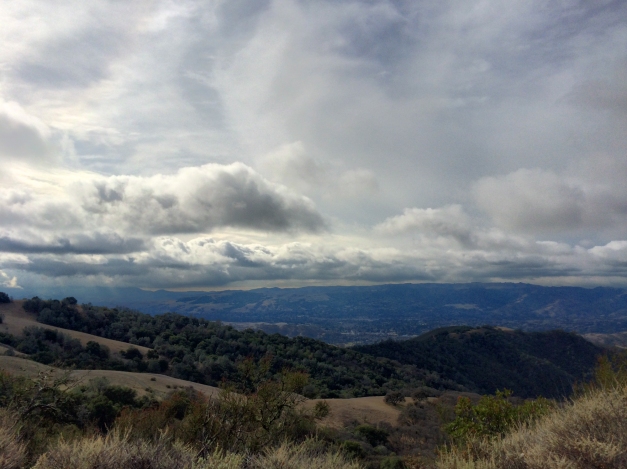 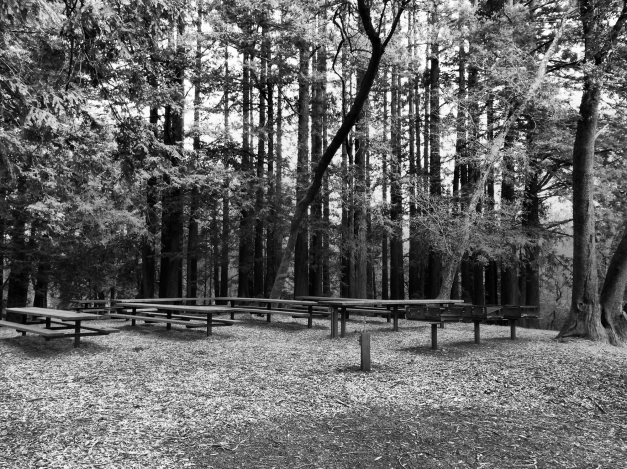 In spite of the few imperfections, VividHDR performed admirably. In fact, I’m going to make it my primary HDR camera app over TrueHDR and ProHDR for the time being. I hope to do a separate post, sometime this month, after conducting an in depth comparison of those 3 apps along with the native apple HDR camera. The speed of the app, the results, and their commitment to improving won me over.

Compatibility: Requires iOS 6.0 or later. Compatible with iPhone, iPad, and iPod touch. This app is optimized for iPhone 5.

***Full disclosure, I did not pay for this app, I asked for a promo code so I could review it. I’m not being offered any compensation for this review. ***